The MACD indicator was invented by Gerald Appel in the late 1970s. Its purpose being is to show changes in the strength, momentum, and direction of the current market.

In the late 1980s, Thomas Aspray added another feature to the indicator which was “Histogram” or the bar graph. The function of this bar graph was to show the divergence between MACD and the signal, done to determine the MACD crossovers. Afterward, this became the industry standard for technical traders using the MACD indicator.

MACD is the simplest and very reliable indicators used by many Forex traders.

The MACD indicator can be very useful for spotting certain high probability trading setups when used efficiently. The default MACD indicator in MetaTrader 4 (MT4) doesn’t use its inventor’s traditional formulas. Which in the given circumstances for the new traders is a bit confusing, especially if they have come to the Forex market after trading other markets?

MACD indicator in MetaTrader4 looks different than MACD does in most other charting software; it is because of the fact that this version displays the MACD line as a histogram. The MACD line is computed as the difference between a “Fast” EMAD and a “Slow” EMA. The MACD histogram is the difference between the MACD/SIGNAL lines. The MACD histogram can also be used reliably for divergence signals. MACD is mostly used to determine over brought and oversold levels.

Following is the best MACD indicator MT4 in case you are wondering and also given along the method to use it.

The following image shows a couple of different versions of the MACD indicator. On the top, it is the custom MACD True indicator. The function of this indicator is to display the indicator in the standard way. The Blueline of MACD is the difference between the 12-period exponential moving averages EMA and the 26 periods EMA. The Redline is the average line or signal line of a 9 period EMA of the MACD line. The histogram shows the divergence of these two lines. 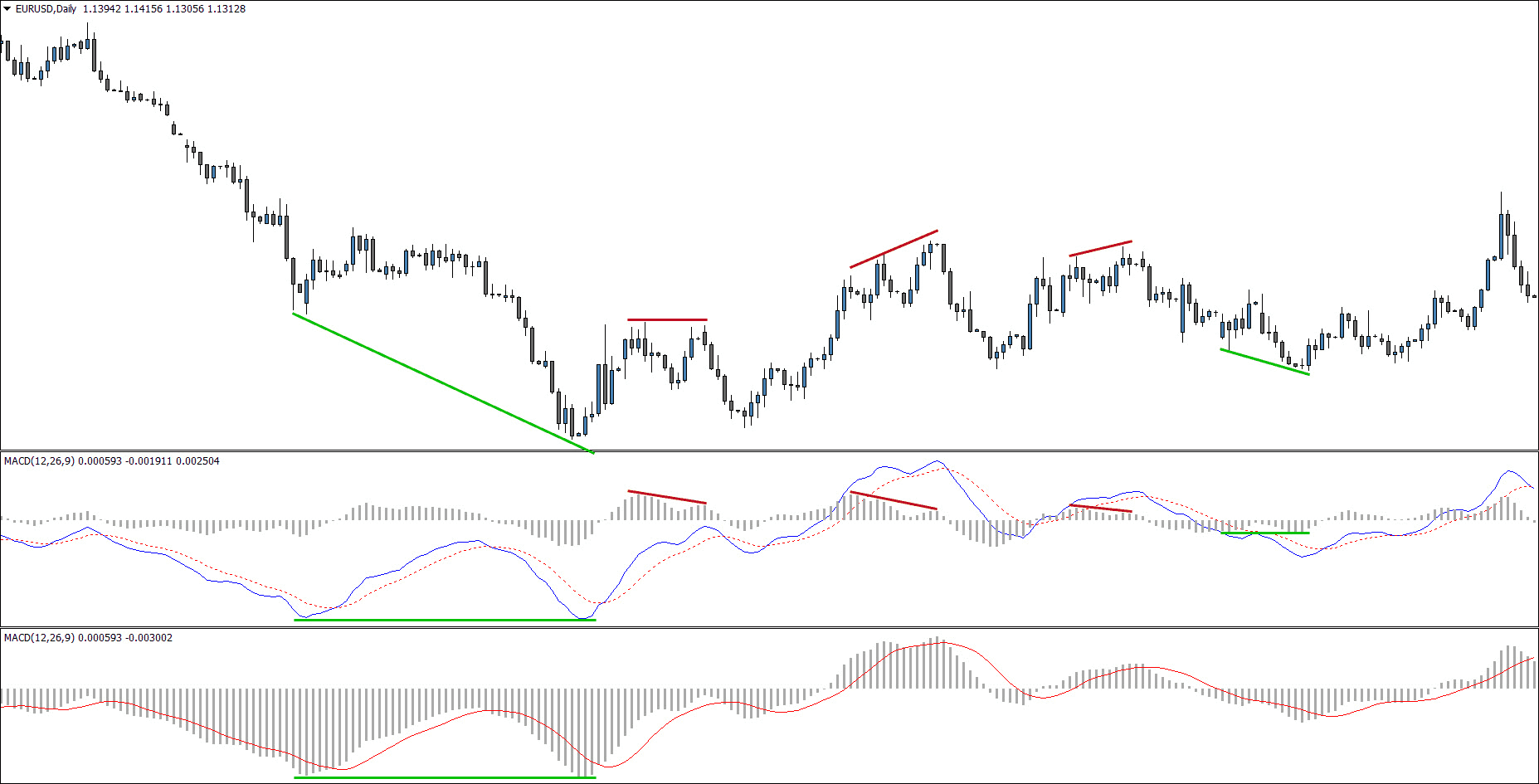 Looking at the bottom indicator window, which is the default MACD indicator for MT4. You will notice that only a bar graph and a red line are displayed. The default indicator displays the contemporary MACD line as a bar graph. Mostly, the signal line is displayed normally but there is no bar graph or Histogram showing the divergence between the MACD and the signal line. It is incorrect because an indicator can display whatever you would like it to display. There are some obvious disadvantages for technical traders that would like to use the default MT4 indicator for trading MACD divergence.

Again looking at the image above, it is marked bullish divergence with green lines and the bearish divergence with red lines. Taking the example of first bullish, MACD displayed on both indicators showed momentum slowing (double bottom) while price continued lower. It is a form of divergence which can be traded using either indicator.

This MCAD indicator can be downloaded from the following Link

This MACD indicator can be among the most powerful lagging indicators that a technical trader can use if you know the correct way to use it. Also, it is one of the main components in many profitable trading strategies and it’s effective in every market. Although the default MACD indicator in MT4 can still be useful it is merely believed that the custom MACD true indicator is the best MACD indicator for MetaTrader 4 MT4.